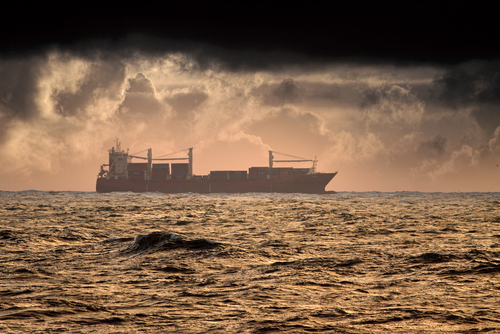 Forces of Nature are unpredictable. Lately it seems, climate change is catalyzing increasingly extreme weather. The force of natural disasters creates a ripple effect of damage and loss that emanates far beyond the community which has been hit.

Some storms sweep in without any warning, while others are anticipated. In the US, hurricane season runs from May to November. Coastal communities and vigilant trans ocean shipping companies must be aware of weather conditions and forecasts.

When it comes to hurricanes, erring on the side of caution is a must. For ships that are docked, the question becomes whether it is best to remain at port, or venture into the open seas. When a hurricane is expected to hit shore it is often safer for docked ships to head out to sea in a direction away from the storm.

For ships that are already out in the open sea, it’s all about rerouting to maintain a safe distance from the eye of the storm. This often means routing away from the destination; with the goal of keeping the ships, crew, and cargo safe.

The Costs of Rerouting are High

When forces of nature cause relentless high waves, the threat of sinking applies to ships of all sizes and weights. Even the heaviest ships weighing in at 170,000 tons are susceptible to sinking when barraged with tall waves over an extended period of time.

Many ships require over 200 tons of fuel per day, rerouting can quickly burn the fuel budget. Ships that leave port late or arrive late at their destination are often subject to delay, demurrage, and detention fees. Depending on the severity of the storm warning, ports may waive or reduce these charges. Demurrage and detention fees aside, late arrival of shipments can push back time sensitive projects causing significant monetary losses. The delayed arrival of cargo at port or final destination often has financial ramifications for all parties involved.

The years of expertise, and dedication RTM Lines has to our clients’ success, can be seen in how we prepare and adapt to changing weather situations, rules, regulations, routes, and technology to ensure the safe and timely delivery of their cargo.