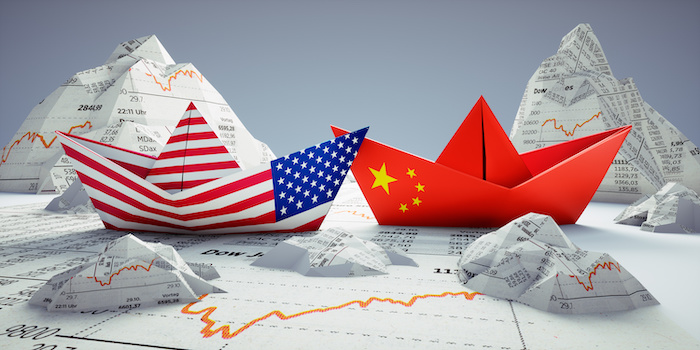 Quantitative Easing is a financial tactic which has been deployed across the world by various central banking agencies in effort to stimulate economies and stave off deflation (the practice started with the US Federal Reserve in 2008). When governing financial bodies participate in QE they essentially pump money into their respective economies by purchasing long-term securities with the goal of lowering interest rates and further stimulating the domestic economy.

Quantitative easing often results in weakening a local currency as a side effect which is advantageous for a country in terms of international trade. Weaker currency correlates to higher export volumes for a country, because a lower currency equates to cheaper exports in the international market. There is much debate and confusion surrounding whether QE is equivalent to currency manipulation because of the aforementioned side-effects.

It is important to remember, however, that QE by definition is a mechanism for financial authorities to adjust interest rates, whereas monetary devaluation directly alters the value of currencies and manipulates a country’s export power in the international trade market. Both QE and currency devaluation are extremely powerful forces that alter the balance of international trade. The most concerning problem with any strategic currency devaluation is that no country is an island, a move by one country will likely bring a response out of its trading rivals and partners alike.  The practice of monetary devaluation is not an isolated occurrence, rather, it has proven a contagious act that self-propels and spreads.

The current state of international trade and the trade wars between the USA, China, and Europe are affecting the entire global economy. America is utilizing a bigger and broader approach to tariffs which is forcing manufacturers and consumers to pay tens of billions of dollars more for imported goods. Certain imports from China such as iPhones and consumer drones cannot be replaced from other sources, this forces American consumers to absorb the higher tariffs and prices in order to purchase their goods.

China is surgically applying higher duties only on American export products which they can import easily from other countries such as Vietnam, Canada, and Japan. Soybean tariffs for American imports were set to 28%, wood, paper, and metal products at 22.3%, and chemicals to 19.3%.  China then lowered average tariffs for all other countries. Beijing calculated decisions keeping in mind that higher tariffs blindly placed on all imports would only hurt their consumers at the end of the day.

American soybean farmers saw their exports drop by 80% from October 2018 to March 2019. Wood exports to China dropped by 42% or $700 million. Reduced exports affect the ocean transportation industry. Tariffs set by China on American seafood such as lobster affect more than just fisherman. Trucking companies, fuel distributors and the Maine economy as a whole will feel the effects. The global market landscape is shifting as other countries vie for China and the USA’s business, as they look elsewhere for substitute import sources. The southeast Asian trade market especially has been stimulated with an increase of exports from Vietnam to both China and the USA.

The international trade market and dynamics are thrown off balance when two nations engage in a trade war. QE and currency devaluation are quick fixes made with the intention of being short-term solutions, but which may end up hurting the global economy and trade balance long-term.

Trade wars may not be the answer as they complicate global trade dynamics. The USA will have to employ a more discerning strategy with future tariff adjustments to prevent harming American industry and consumers.

Call 800.847-7447 or email info@rtmlines.com to book your next international cargo shipment today